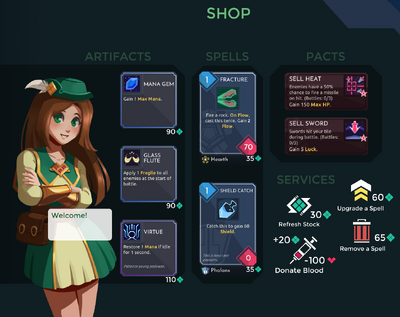 The Shop is a zone where the Shopkeeper resides. It has a very high chance to show up once in each World, so take advantage of it when you can. Here she will sell you Spells, Artifacts, and Services for Money. She also provides Pacts for a cost.

The Shopkeeper sells 2 random Spells that are removed from the Shop on purchase.

Pacts are challenges that immediately reward the player upon accepting them, but carry a penalty for a set amount of battles as marked on the card. The Challenges and Rewards are random upon Pact generation, but they are clearly listed on the card.

Do note that Pacts can be removed with a

Removal. This will remove the Challenge, however the player will still keep the reward. This is a very strong Strategy when it comes to Pacts that have good rewards (like

Enemies have a 50% chance to fire a missile on hit. (Battles: 0/3)
ID: ChalHeat
SELL INSURANCE

Teleport to the inverse tile when you cast a Spell. (Battles: 0/2)
ID: ChalLocation
SELL MAGIC

Hit self for 5 dmg when you cast a Spell. (Battles: 0/1)
ID: ChalMagic
SELL SPIRIT

If players take the Dark route, the Shopkeeper will sell Artifacts and Spells in exchange for the player's